Next week Dublin will see more than 48,000 College Football fans traveling to Ireland for the 2016 Aer Lingus American College Football Classic. Over 25,000 visitors from the USA are set to fly in and support their teams during the game week. Sports-related tourism has emerged as a very significant element of the global travel business in recent years and the Aer Lingus College Football Classic will be another wonderful opportunity to showcase Dublin and Ireland, and more generally the many attractions that the island of Ireland offers as a holiday destination.

The battle between The Boston College Eagles and the Georgia Tech Yellow Jackets is set to take place on September 3rd 2016 at Aviva Stadium, Dublin.

Dublin will be hosting a lot to more than just a game. The week leading up to the game will be packed with exciting events throughout Dublin! The historic and perfectly located Trinity College Dublin will be home to the 2016 Welcome Village. For more information on the events during the game week visit collegefootballireland.com 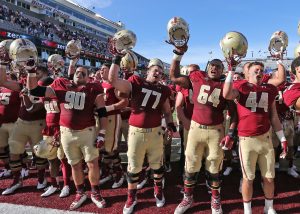 Boston College was founded in 1863 by the Society of Jesus to serve the sons of Boston’s Irish immigrants and was the first institution of higher education to be founded in the city of Boston. Today, it is one of the foremost universities in the nation, with a coeducational enrollment of nearly 14,700 undergraduate and graduate students. BC boasts a rich American football tradition that includes 24 postseason bowl games, a Heisman Trophy winner (Doug Flutie) and nine members of the National Football Foundation College Football Hall of Fame. The Eagles are coached by Steve Addazio, who has led the team to two consecutive postseason bowl games since becoming head coach in 2013. BC has, in fact, participated in a postseason bowl game in 14 of the last 16 seasons. We Are BC 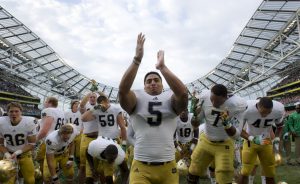 Founded in 1885, the Georgia Institute of Technology is a public research university with more than 21,500 undergraduate and graduate students. Ranked as the nation’s seventh-best public university, Georgia Tech provides a focused, technologically based education. Georgia Tech is one of the oldest college football programs in the nation and ranks in the top 20 in all-time wins. Georgia Tech has made 43 bowl appearances and has won four national championships. The Jackets are coached by Paul Johnson, who is 58-35 in seven seasons on The Flats. He has led the Yellow Jackets to three ACC Championship Game appearances in 2009, 2012 and 2014. Georgia Tech won the 2014 Orange Bowl in decisive fashion to finish in the Top 10 of final AP and coaches polls. Together We Swarm!

Last American football game held in Dublin was between the University of Central Florida (UCF Knights) and PennState in their 2014 Season opener in GAA HQ on the 30th August 2014. Penn State won a thrilling season opener with a 36-yard field goal as time expired to defeat the University of Central Florida 26-24 in front of a raucous 55,000-strong crowd in Ireland. Previously we’ve seen American football game at Croke Park in 1996 – Notre Dame beat Navy 54-27. The same two teams played out a 50-10 scoreline at the Aviva Stadium, the home of Ireland’s rugby and soccer teams, in 2012.

WIN Dinner for 4 at Fade Street Social and 4 tickets to the Aer Lingus American College Football Classic.  The Boston College Eagles & the Georgia Tech Yellow Jackets at the Aviva Stadium, Dublin on the 3rd of September 2016!