As the summer unfolds around us, Ireland’s re-emergence is in full swing, and nowhere is that more apparent than in the capital city. It’s safe to say Dublin’s creative quarter is buzzing once more.

Yes, Dubliners are out to play, but they’re also hard at work bringing our beloved city back to life. There’s more innovation going on than ever before, and with that comes a sense of community that is unique and characteristic of the Irish, but with a whole lot of other stuff mixed in.

In the heart of the city centre, the Creative Quarter is the epicentre of it all.

The Creative Quarter, for those who might not have realised this little district had a special name, is the area spanning from South William Street to George’s Street and from Lower Stephen’s Street to Exchequer Street, roughly speaking, and is home some of Dublin’s most well-loved little gems.

While the area is home to several businesses that should be, in theory, competing with one another, the reality is, it’s a community more than anything else.

Envisioned, tied together and given its namesake by Dublin City BID, the Creative Quarter highlights some of Dublin’s local artists, entrepreneurs and chefs working to add their touch to our city.

This is one neighbourhood you can’t help but slow your pace in. The scenery, the shops, and the people invite you to stop what you’re doing and take it all in.

From George’s Street to South William Street you follow the red brick buildings through a little maze of boutiques, cafes, bars and restaurants that are all uniquely Dublin.

You’ll notice the vast majority of businesses that make up the Creative Quarter are independent, bringing to the fore an authenticity that’s undeniable. 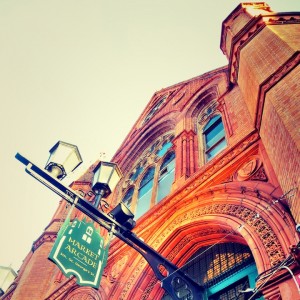 The Creative Quarter is charming. Walking down the streets, you see some of the best that Dublin has to offer. Perhaps the centrepiece of the Creative Quarter is the George’s St. Arcade, a Victorian market in the heart of the city. The Arcade is home to about 50 different local businesses, including artists, boutiques, designers and restaurants.

One of the most well-known inhabitants of George’s Street Arcade is Maurice Fitzgerald, a self-taught artist long known for delighting passers-by with his distinctive landscape portraits and a technique that’s all his own.

Barry Doyle Designs, also housed in the Arcade, is home to the husband and wife team that put their personal touch on Irish inspired jewellery. In their studio, they craft everything by hand, and even let their customers get in on the action and participate in the creation of their commissions.

One of Ireland’s most celebrated clothing designers, Helen McAlinden, calls the Creative Quarter home. Renowned for her sophistication, Helen is an award winning Irish designer.

The list of lovely shops and boutiques goes on and on, and to take it all in, a Saturday afternoon of exploration is essential.

When it comes to food, in Dublin, we’re spoilt for choice. There’s no shortage of fine eateries across the entire city, but the Creative Quarter is home to some local favourites like Coppinger Row, Brasserie66, Pichet and Fallon & Byrne. Sourcing local produce and drawing on international inspiration define so many of the best restaurants in this area.

One of Ireland’s renowned chefs, Dylan McGrath, has made this area his home with two massively successful restaurants, Rustic Stone and Fade Street Social.

When Rustic Stone first opened nearly four years ago, some were skeptical. Four hundred degree hot stones and “cooking your own dinner” are not typically words that diners expect or welcome, but Rustic Stone has made believers out of even some of the most doubtful Dubliners. Rustic Stone provides an ethos more than a concept. They use the freshest ingredients and apply only the simplest techniques to get the most flavour possible. The end product is consistently fresh food that caters for a changing culture of customers that are looking for nutritional value as much as flavour.

Dylan’s other restaurant residing in the Creative Quarter, Fade Street Social, has quickly become one of Dublin’s favourites. It’s huge. Over 8,000 square feet are home to two distinct dining rooms, one serving more traditional, a la carte meals and the other playing with an Irish and international inspired tapas concept. Fade Street Social is just another example of evolution in the Creative Quarter. It’s a departure from the restaurant tradition in Dublin, but at the same time it holds true to its Irish roots.

Not only does this neighbourhood house fantastic restaurants, but some of Dublin’s most well-loved bars and pubs call this neighbourhood home too. One not so well kept secret is The Bar With No Name. A snail to adorn the entrance is the only clue, but an endless chain of patrons frequent this little hideout. Just down the road, Pygmalion is always full to the brim (especially on the weekends) with those lucky enough to find a space, and just across the lane you’ll find Grogan’s, an old Dublin haunt perfect for people watching.

In this neighbourhood, the prevailing theme is diversity and variety.

The Dublin’s Creative Quarter showcases some of the most talented artists and designers and is home to a seemingly endless list of unique restaurants and bars, but that’s not what makes this district so special.

The Creative Quarter reveals the true essence of what it is to be a Dubliner, here and now.

In this moment, Dublin’s creative quarter is brimming with talent from home and abroad. It’s a melting pot in the very best sense and a place where cultures mingle and grow together. It’s a blend- with the old Dublin we can only read about living alongside modern Irish culture.

Most of all, it’s the real people we have here who love this city and who love what they do, who’re trying to add their personal touch to a city that’s evolving before our eyes.

In the Creative Quarter, every day we see people just doing what they love, bringing their passion to life and putting it on display for the rest of us. In the midst of the design houses, boutiques, exciting restaurants, trendy bars and hipster haunts, the prevailing element is the love and passion we all share for our craft.